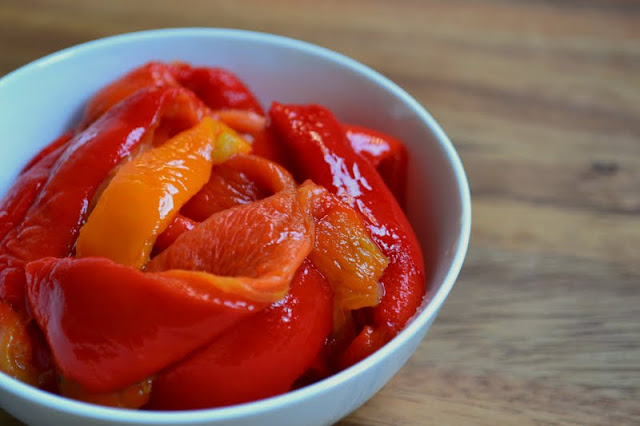 You can't beat the sweetness of roasted red peppers. An Italian antipasto platter is incomplete without them and they're awesome on a Caprese sandwich. Now, I've been eating store bought roasted red peppers for awhile now. I buy the ones that are in cute little glass jars that are marinating in some vinegar, salt, and olive oil...no bad ingredients and oh so tasty. Yet these here peppers are out of this world delicious and I don't think I'll ever need to buy them in the jars ever again. They're really simple to make and I've been putting them on sandwiches, in salads, pureeing them into my hummus, and just eating them by themselves. I can't think of a better way to use beautiful peppers from the farmers market. I used red, orange, and yellow sweet bell peppers and they were divine. 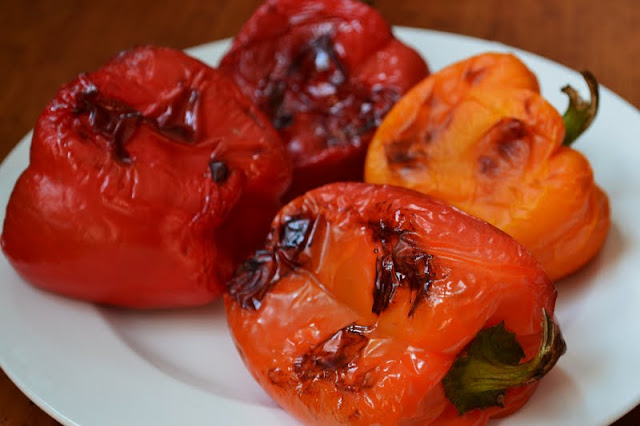 Basically, all you need to do is put some whole peppers in to a hot oven for about 40 minutes until they're blistered and just starting to blacken. Then you take them out, cover with foil, and let sit until they're easy to handle. Then, those blistery skins will slip right off. You then remove the seeds and cut the peppers to your desired size. Marinate them in some olive oil, red wine vinegar, and garlic and you've got something special. 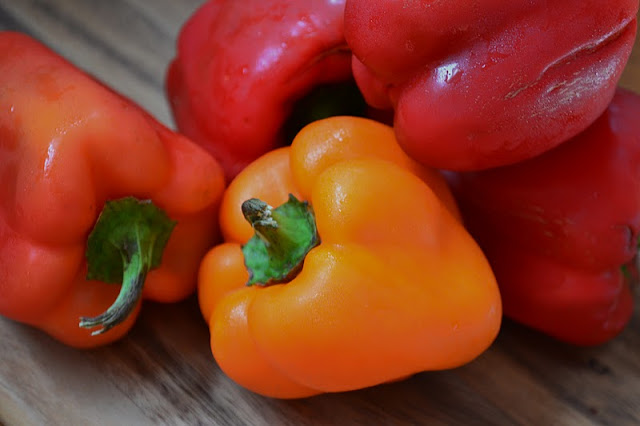 1. Preheat oven to 400 degrees. Put whole peppers on a foil lined baking sheet and bake for 40 minutes, or until they're blistery and really wrinkled and starting to turn black. At about the 20 minute point, turn the peppers with tongs so that they evenly roasted.

2.Remove from the oven and cover them with a piece of foil, making sure that they're nicely covered with no holes for escaping steam. Let them peppers sit all wrapped up for about 30 minutes or so.

3. Remove the foil and peel the peppers. The skins should slip right off. Take the stems off and remove the seeds. Do not rinse the peppers with water, because you will lose all of their flavorful juices. Cut (or just tear them like I do) the peppers to your desired size and serve them or keep in a jar with a 1-2 tablespoons of red wine vinegar, some chopped garlic, and a pinch of salt. You may drizzle them with olive oil before serving, but I don't recommend refrigerating them with olive oil on them because the olive oil will solidify from the cold. They keep up to a week in the refrigerator in a covered jar.