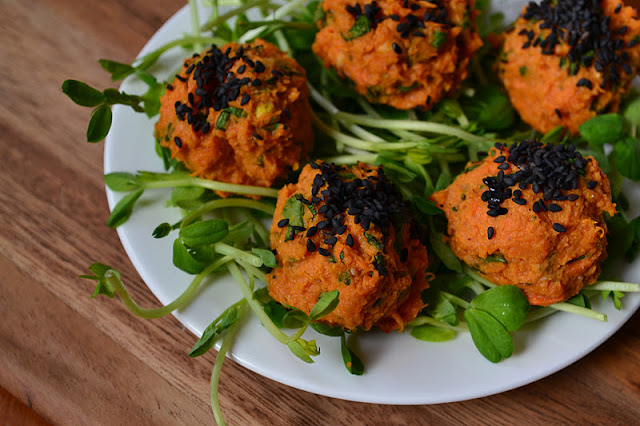 It feels like it's been way too long since I posted a new recipe and I'm dearly, truly, sorry for that. But I have here a really awesome recipe that's sure to make up for my lack of time spent on the blog. These little falafels are so tasty, easy to make, and super healthy. 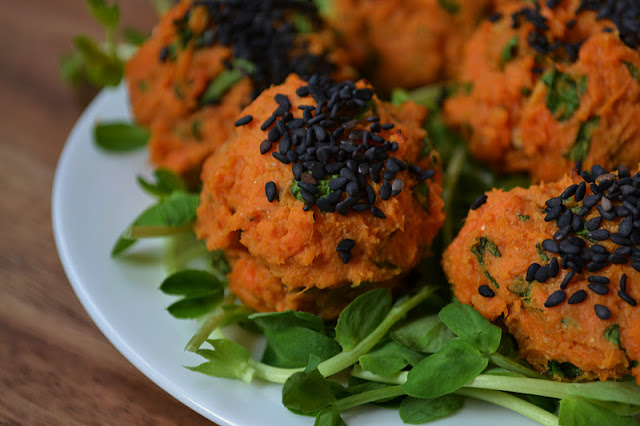 I'm a huge falafel fan. Like I love them. But I don't love the fact that they're normally deep fried. Now, I've made traditional falafels before in a skillet and they were wonderful. But these are a healthier and more creative version that were such a success. Granted, if you're looking for that crispy bite that fried falafels are known for, you won't find it here. But that's where the toasted sesame seeds on top come in. They give a nice texture that's just perfect. And roasting the sweet potatoes beforehand until they're deeply caramelized and soft gives a nice depth of sweetness. The cumin, coriander, garlic and lots of fresh cilantro flavor the sweet potato really well. 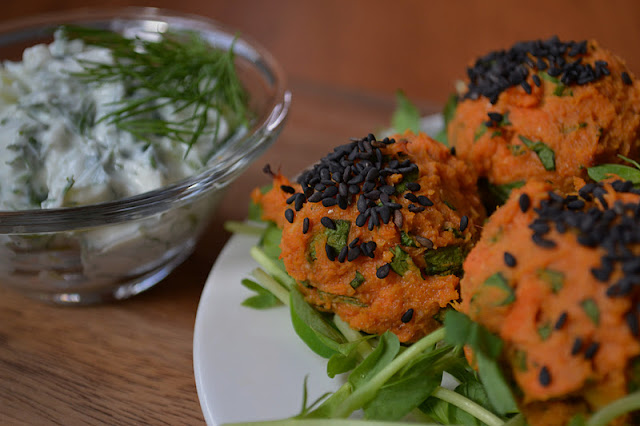 But I'm not even finished! These wouldn't be complete without the yogurt sauce, which really is a must for this dish. It's so cool and refreshing and I seriously just want to eat it by the spoonful. Serve everything with warm whole grain pita bread and a big green salad and it's the perfect meal, if you ask me.

1. Preheat the oven to 425F degrees and roast the sweet potatoes whole until just tender - 45 minutes to 1 hour. Turn off the oven, leave the potatoes to cool, then peel.

2. Put the sweet peeled potatoes, cumin, garlic, ground and fresh coriander, lemon juice and chickpea flour into a large bowl. Season well with salt and pepper (I added a little more than a teaspoon of salt), and mash until smooth with no large chunks. Stick in the fridge to firm up for an hour, or the freezer for 20-30 minutes. When you take it out, your mix should be sticky rather than really wet. You can add a tablespoon or so more of chickpea flour if necessary (the water content of sweet potatoes varies enormously).

3. Reheat the oven to 400F degrees. Using a couple of soup spoons (put a well-heaped spoonful of mix in one spoon and use the concave side of the other to shape the sides) or a falafel scoop if you have one, make the mixture into falafelly looking things and put them on a parchement-lined tray. Sprinkle sesame seeds on top and bake in the oven for around 15 minutes, until the bases are golden brown.

While the falafels are baking, combine all the ingredients for the sauce in a bowl. Serve alongside the falafel. The sauce keeps well and I have used it as a salad dressing with a bit of olive oil added to it. Yum. 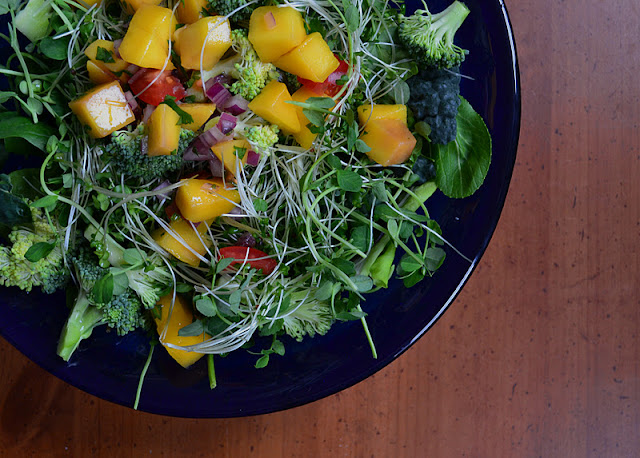 I've been eating a lot of greens lately. I mean, I always eat a lot of greens. In our house we go through multiple bunches of kale on a regular basis. But recently, I've been increasing my greens consumption even more. And it feels so good! They truly are a gift from nature, full of chlorophyll, antioxidants, vitamins, and minerals. Everyone could use more greens in their diet. The world would be a much healthier place if they did. 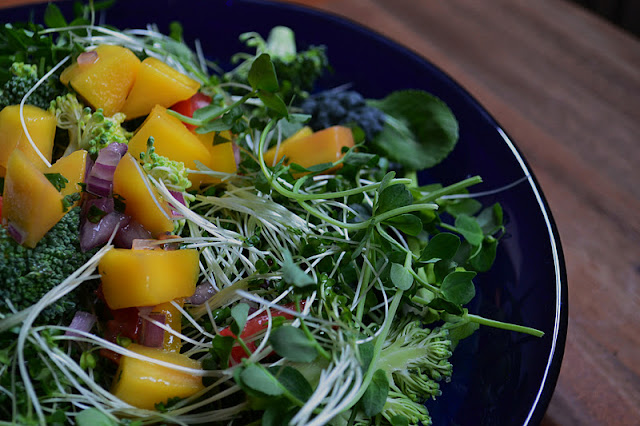 I threw this colorful salad together after another trip to the farmers market. I bought some gorgeous kale, mixed salad greens, and pea shoots. I put them all of  in a bowl and added some broccoli sprouts and broccoli and topped the whole green monster salad with a homemade mango salsa. This salad is sure to give you a nice dose of antioxidants from all of the colorful produce. It will also brighten up these dark cold winter days we're having with a nice tropical touch. Feel free to double or even triple the mango salsa recipe below and use it throughout the week.

Super Green Salad with Mango Salsa (serves 1 as a main, 2 as a side)

Combine the salad ingredients into you largest bowl. Set aside. In a smaller bowl combine the salsa ingredients and toss together. Finally, top the greens with the mango salsa and toss well. So easy and so delicious! 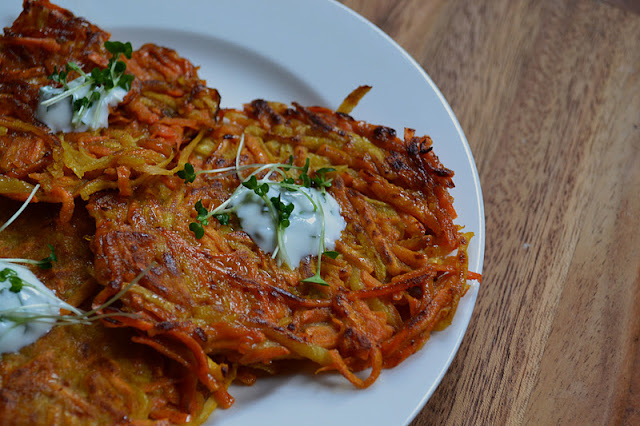 I have to say that these are some of the tastiest things I've made in quite awhile. Crispy shredded sweet potatoes and parsnips topped with a super cool cilantro yogurt sauce and antioxidant-rich broccoli sprouts equals food heaven. Yes, they were a little time consuming to make, but they were totally worth it. This was my first time making anything with parsnips and they worked really well here. And how could I not like the contrast of color in these little guys? 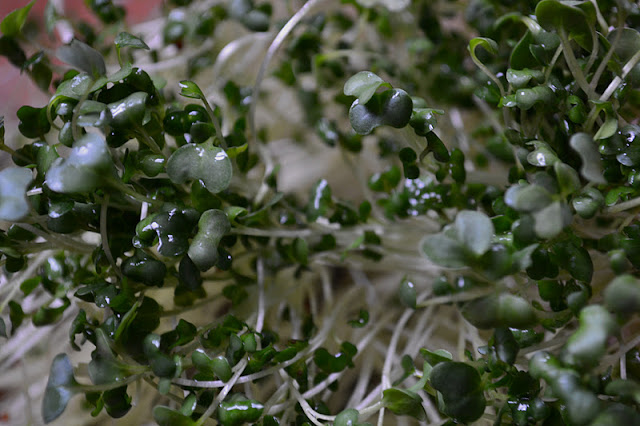 What's also pretty neat about these latkes is that they're gluten free!  Potato starch and egg  is what holds them together. I have to admit that I was worried that they weren't going to hold together well, but I was pleasantly surprised when I was able to flip them in the pan and transfer them without them falling apart at all. The yogurt sauce is so lovely and is a perfect topping for them. I chose to add some broccoli sprouts as well, because of their great color and texture, plus they are so amazingly healthy. 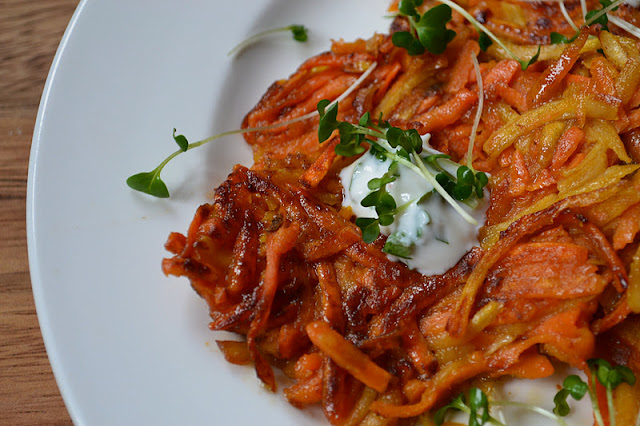 I love how these are made with sweet potatoes and not white potatoes, which dramatically increases the nutrients and, in my opinion, flavor! Serve these beauties with a nice big green salad and it's a perfect light meal.

For the latkes:
1 large sweet potato, peeled
1 or 2 large parsnips, peeled
half of a red onion
1 organic egg
1/3 cup potato starch, plus more if necessary (I'd imagine you could use flour instead if you want )
sea salt
coconut oil or butter

2. Grate the red onion into the sweet potato bowl. Add egg and a few pinches of sea salt and combine well. Pour in the potato starch and toss everything together.

3. Set a large cast-iron skillet (or similar heavy-bottomed pan) over medium-high heat. Add a tablespoon of oil or butter. Grab 1 tablespoon of the latke batter and put it in the hot pan. Cook until both sides are browned, about 3 minutes. Turn off the heat. Allow the tiny latke to cool, then taste it. Did it fall apart in the pan? Add more starch. Does it need more seasoning? Add that. I had to add a bit more potato starch to make sure things stayed together plus a little salt for flavor.

4. When you have the latkes the way you want them, turn the burner onto medium-high heat again. When the oil is hot, add 1/4 cup of the latke batter at a time, pressing down on the top when it is in the pan. Do not crowd the pan. I put  2 latkes at a time. Allow the bottoms to brown, about 3 minutes, and carefully turn the latkes over, cooking for about 3 minutes.  Remove the latkes from the pan when they are as browned as you wish.

5. To make the sauce, combine all the sauce ingredients in a small bowl. Serve a small spoonful on each latke and top with broccoli sprouts. Enjoy! 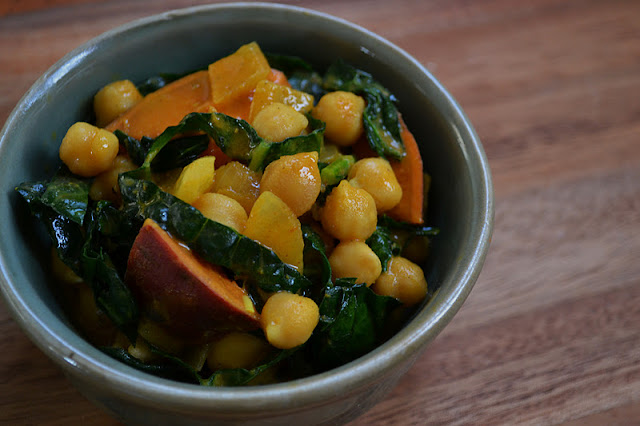 I've been really embracing coconut milk and coconut oil lately. It has received a bad rep for awhile because of its saturated fat content, but current research is shedding lots of positive light on this special nut. You see, this type of plant based saturated fat is actually great for our bodies in so many ways. It has antiviral properties, aids in the absorption of vitamins and minerals in the body, improves insulin secretion and utilization of blood glucose, reduces inflammation, and functions as an antioxidant among many other benefits. And this rich creamy milk is so amazing as a dairy alternative because it tastes so damn good! I'm giving dairy a break for awhile, so coconut milk is a nice way to lend creaminess to a dish. This curry couldn't be any easier to make and is so full of nutrition. In addition to the coconut, you also get the added health benefits of super green kale, beta carotene from the sweet potatoes, and antioxidants from the turmeric in the curry powder. Turmeric is what makes the curry powder yellow, by the way, and it too has wonderful benefits for the body. So go make this tasty and healthy meal to start the new year off right.

1.  Put potato cubes into a vegetable steamer basket and steam for about 7 minutes, or until they are just tender. Remove from steamer and set aside.

2. In a large saucepan or deep skillet on medium heat, saute onion in oil until softened. Add garlic and then the coconut milk. Add curry powder, tomato paste, and salt and stir well until combined.

3. Then, add cooked chickpeas and the cooked sweet potatoes and simmer for about five minutes. Add salt if you think it needs it.

4. Finally, reduce heat to low and add chopped kale. Stir until the kale begins to wilt. Serve sprinkled with fresh cilantro and over brown rice or just by itself.