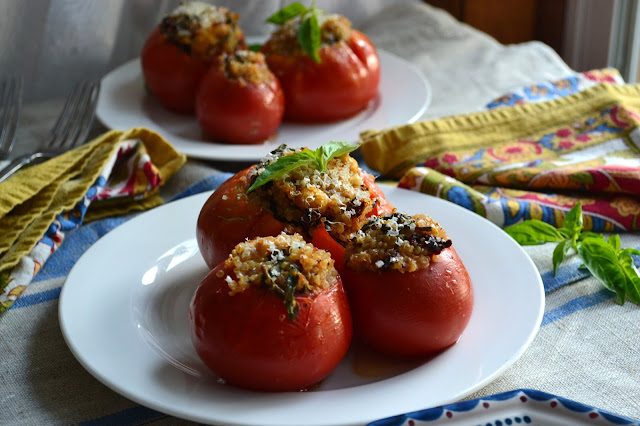 I can't believe that I went this entire summer without posting a legit recipe showcasing tomatoes (tomatoes on avocado toasts don't exactly count). That doesn't mean I haven't been eating them and enjoying them to their fullest. And I'm sitting here holding back my tears because I realize that very very soon, there won't be any more tomatoes at the farmers market until next summer. Sigh. 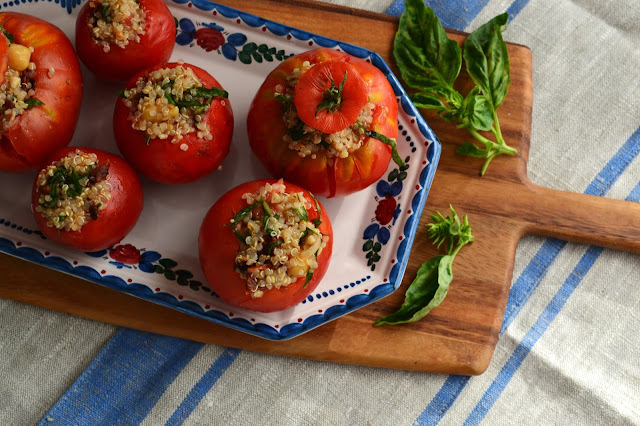 I've made a version of stuffed tomatoes on the blog awhile back and you can check that one out here. That recipe is a bit simpler and lighter. Today's recipe is more substantial and these tomatoes are just about a meal on their own, especially if they're served with a heaping plate full of garlicky kale. Feel free to get creative with the quinoa stuffing. You can't really go wrong with it. Add some caramelized onions or roasted red peppers to it. Yum. Or I'm thinking you could even do a Mexican style version of these tomatoes with a brown rice and black bean stuffing. I'm picturing some cilantro, fresh corn, chili, and cumin topped off with a nice sprinkling of cheddar cheese. Hmmm...might have to go try that while I can still get tomatoes at the market! Either way you stuff them, they're going to be delish. I can guarantee it. 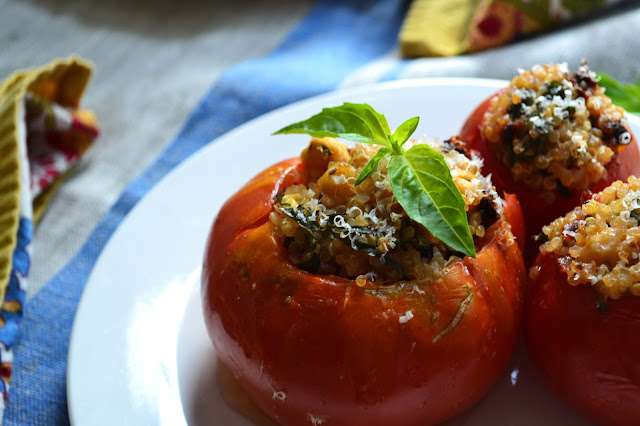 Depending on how many tomatoes you choose to stuff and how large they are, you may have leftover stuffing. That's ok because this stuffing is excellent on its own served over a bed of mixed green lettuces.
Quinoa Stuffed Tomatoes
For the Quinoa Stuffing:
1 1/2 cup cooked quinoa
1 cup cooked chickpeas
1/2 cup chopped sundried tomatoes
2 cloves garlic, finely chopped
1/2 cup fresh basil, chiffonaded
1 tsp dried oregano
2 tablespoons capers
1/4 cup pitted kalamata olives, chopped
sea salt and black pepper, to taste

1. Combine the stuffing ingredients in a large bowl and mix well. Taste and adjust seasoning. Don't be afraid to add salt...it makes the flavors pop! Set aside.

2. Preheat oven to 375. With a sharp knife, gently cut out the stem portion of each tomato. Then, with a spoon, gently scoop out as much of the seeds as possible, being careful not to split the tomatoes or poke through the bottom of them. (Note: I added the seeds of the tomatoes straight to the quinoa stuffing mixture to add moisture and because I didn't want to waste any part of my beloved tomatoes!)

3. Gently stuff each tomato with quinoa mixture, again making sure you don't split or poke through the tomatoes. Put them in a baking pan. Drizzle them with olive oil and top them with freshly grated Parmesan cheese if desired. Bake for about 30 minutes. Remove from the oven and serve with a bit more cheese.